A downloadable little game for Windows

Just another day at work.

Gameboy styled game made in 11 days for GB Jam 9.

Please keep in mind that you might encounter some bugs while playing!

You can edit the game's "data/controls.ini" file to remap keyboard and gamepad controls

Get the soundtrack on BandCamp:

Just a small remark: the file for the original game jam version is called ‘Necrow co v4.4 jam build.zip’, but its title screen says that the version is 1.4; if the latter is correct, then the filename could be corrected.

(By the way, figured there would be a secret, yet finished on both ‘difficulties’ to see the difference, and now at the special level which is indeed hellish. XD Saving it for later, the final fight was already something, but this is gruesome!)

This is due to an inconsistency with how the version numbers are listed. The original build of the game was version 1.4.4. In game the versions use the first 2 numbers, while the zips use the last two. I didn’t anticipate on anyone noticing…

I am losing, however, I won't let a little death get in the way. I love this one

EDIT:  i'm very skilled in making gameboy games. check my demo out if you have the time, i'm sure i can do the game justice.

Finally found time to play this game and I really enjoyed it. I'm curious what game engine was used to make the game.

It’s done with Fusion by Clickteam

Ah nice. I'll check it out! Seems worth the try after seeing what  you did with it.

Windows Defender found a Virus Called "Wacatac" which apparently came from This Game's Exe. Maybe its been hacked?

When I download it the computer registers a trojan. Any solution?

Unfortunately, due to the game being programmed in multimedia fusion, It will pretty much always be reported as some form of virus now, since windows changed their antivirus.

(edit) I’m not sure, but hopefully the fusion devs will fix this in an update soon. I’ve uploaded a newer version of the game, in hopes that it may work now. This seems to be my only game affected by it.

hi, im having trouble playing with my joystick (one of those snes usb). all commands work, but i cant move using the arrowns, only with the keyboard's ones. already tried editing the game control pasta, but cant seem to use the right words (tried D-pad and Arrow keys)

Unfortunately, the controls.ini file doesn’t allow for remapping of d-pad inputs, since they aren’t considered buttons in the game’s system, so only the d-pad is used. Does the d-pad on your specific controller send input as a hat, or as an axis on your computer? The game can only detect hat input for directions.

Classical Feeling and cool platformer. I like how you are a crowand you have to collect soul. Most important is the rpg aspect as well which i like.

I stuck in a hole and literately couldn't get jump out of it. :(

I thought i fixed all the softlocks, can I get a screenshot and version number?

I'll take a picture of it and send it to you

Is there any possibility to share it also as a Game Boy rom?! I would die to play it on an Android emulator!

This is only a Gameboy styled game, not actually made for the Gameboy. No rom is available because none exists.

Man, this game took me 1 hour to finish and I didn't know that in one hour, I would experience so much emotion.

Thank you for this creation and I hope you will continue on this path !

btw , what tool did you use to make this. I have participated on a few jams with a library called Quintus before. They were not on this site though and I want to try using a new game engine with a fresh start. Thanks in advance :)

The game was made in Clickteam fusion. If you’re already experienced with programming, I wouldn’t recommend it since it’s very old and is structured sort of like construct or game maker with visual scripting.

Reply
Another Gamedev Studio299 days ago

A very cute game to play. Really has that cute retro vibe to it!

Glad to see it doing well after GBJAM!

I found this game quite appealing. It doesn't start off too difficult - it does a good job of rewarding players for trying it.

Although the game does impose a controller profile, it does (at least) come with the ability to edit "data/controls.ini". I would've preferred the game to have a built-in keyboard or gamepad toggle, but at least the INI file option is there.

Even if you disable the imposed controller profile, the game will still impose on the d-pad. This is quite common. It's not a huge deal to me. Lots of games impose MUCH more, so in this case, I'm thankful.

There doesn't seem to be a way to automatically maximize the screen. Additionally, I assumed that Alt-F4 is the right way to close the game. Alt-F4 was not included in the Game Controls list (above).

I know I'm being nit-picky, and honestly, this was a great game overall - I'm only bringing it up because there's a certain kind of perfection this game would have, with these extra provisions.

Absolutely FANTASTIC game. Cute as all heck, but not just cute, extremely well done pixel art. I may be a bit crow-biased, I'll admit, but oh my gosh, every second of this game was just so fun.

It's not just silly jam fun tough, it shows really good level design. Elements are introduced - such as wind that moves you around, or un-killable stationary enemies - in such a way that you can see them and get used to them, then they become primary elements of the level ahead.

I liked the game, it has nice graphics, good gameplay, simple soundtrack, but it's not boring to listen to. The only flaws were that on my computer the fps is fluctuating frequently, and sometimes the dialog boxes are disappearing. In general, the game is pretty cool and very promising, but there are things that could be improved.

This game looks amazing, is there a version that I can put on a flash cart? Am I just not seeing it?

The game’s not actually not for the gameboy (at least not yet), just gameboy styled. Maybe i should put that on the itch page

Reminded me a lot of playing Kirby on the gameboy while also feeling unique and different. Really fun little game!

What a cool game ! the graphics the idea, the music, everything is cool !!

My negative point are the dialog of the crows who 's open is very annoying, the bug door's but on top of that is the difficulty... I had to use cheat code (infinite live and fly), it's so unusual to have the jump and the fire of those button of the X box controller, it ruin the gameplay...

An excellent game, sadly the difficulty is not balanced.

You can always remap the buttons in the controls.ini file

I enjoyed this quite a bit. I've put some thoughts about the game up on my website. Here's the link https://mrdavepizza.com/necrow-co-a-gameboy-style-platformer-about-a-soul-reapin... Thank you for the intriguing game!

The game was made with clickteam fusion, it’s not uncommon for antiviruses to false positive fusion software for whatever reason

can i re use or modify your art? its really cool looking crow

reuse and modification is not allowed

That's not really true. There are hardly any games that use the developer's own art. Most have a team or use assets that are free or purchased. There's nothing wrong with asking. What's wrong is when the assets are used without permission. Don't discourage people from making games just because they don't do their own art.

not discouraging people from making games , discouraging from cutting corners that will affect them in the end giving them less productivity and efficiency

Not that they have this crow, but here is a list of Gameboy stuff on Itch.io that includes some free assets (only if they say they're free of course): https://itch.io/c/1313741/gameboy-homebrew

what stage is this in? I’ll see what I can do to fix this

It was like the 3rd or 4th screen of the first level, the part where they were first introduced. 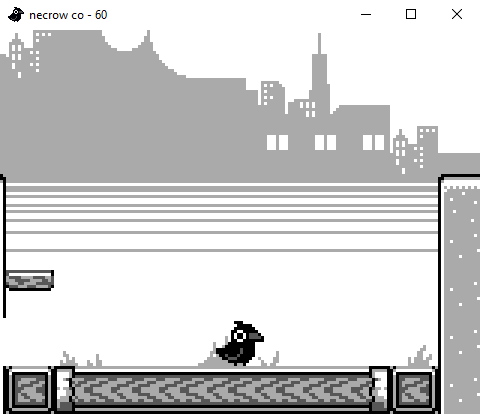 What engine was this made in?

It sied it was free

It is free, If itch.io asks you to pay, it’s just for donation, theres a button to skip that

So people can play it

No Android version or even Gameboy rom version

not sure why there would be

One reason is that a ROM can be run either on actual GB hardware or in an emulator, making it platform-agnostic.  Someone else asked about a Linux version, but with a ROM, they can run that with an emulator on Linux; no need to remake the game just for Linux.

The thing is that the game is just gameboy styled, it’s not actually a gameboy game!

I understand, was just explaining why someone would want a ROM.

ahh this is true

Good game! It's fun to play, the colors of the art are beautiful and the crow is cute

you inspire me to create more.

This is such a lovely game! The graphics and music are charming, and the controls are satisfying. Levels are cleverly designed so that new concepts are introduced nicely, then played with in interesting ways. Secrets are fun to find! It’s a love letter to Kirby that has its own distinct identity.

I ain't finna cap in here my boi or girl whatevs..this game is liiittttt been playin for a lil while but i juts AbSorVeD all that charisma and art style, you creator, should be VERY proud of yourself congrats.

I enjoyed this quite a lot :) Really beatifully put together.

Very cool retro game, well done! I love the art, and the gameplay is really nice!

Can we have a linux version?

what engine do you use?

is it in gameboy style? Or does it actually export roms?

I LOVE THE ART STYLE!

You absolutely nailed the kirby-like feel!
Both the Aesthetics and the gameplay really feel like Kirbys Dreamland without seeming copied at all.
My favourite mechanics are the bells and the crouching :)